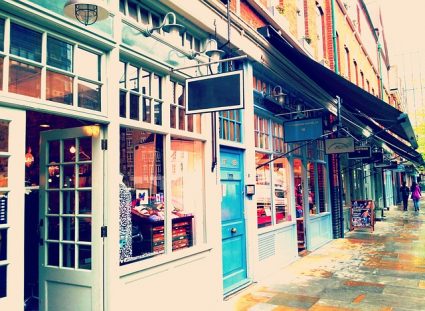 The Ever-Changing Face of High Street

Internet usage has steadily increased in the UK. This continued growth in eCommerce engagement activities highlights major challenges facing the UK high street (for my American colleagues, think Main St.). Around 25% of total UK sales will be conducted online by 2020, predominantly driven by mobile commerce. The Internet has become the second most important distribution channel (after high street retailing) and has established itself as a vital source of the customer information needed to enhance the overall shopping experience.

Fashion retail occupies a large and vital part of the UK economy, but for the British consumer, shopping has become a key leisure activity and an important part of peoples’ lives. More than a third of all UK consumer spending goes through retail businesses, with fashion as one of the key drivers. The UK, like most countries around the world, has had to adjust to the changing needs and buying habits of its consumers.

But where are the heritage brands positioned within this competitive, digital market? Zara, the Spanish brand part of Intidex, is now more popular in the UK than Topshop, according to a new study based on Google searches. In 2016, the Spanish brand saw a 20.18% rise in searches compared to the year before, followed by Missguided (11%), and TK Maxx (4.26%). The findings came as part of Media Vision Interactive’s Fashion Demand Report. The brand that saw the largest increase in Google searches was the online retailer Pretty Little Thing, another fast-fashion online retailer based in Manchester, where demand grew by an impressive 84%.

Online retail businesses have begun emerging and setting new standards for others around the world to follow. These small, independent retailers have learnt how to survive by understanding their customers better than anyone else. With many shoppers swayed by speed and convenience, fast fashion and multi-brand online retailers seem to be ruling the roost.

Several Arcadia brands, Topshop included, saw a dip in searches and sales. Topshop slipped by 8 percent in online demand; could this be due to the changing public perception of its boss Philip Green over the 2016 BHS scandal? Arcadia as a whole did not fare well in the study. Searches for Topman decreased by 17%. At Miss Selfridge, they fell by 25%, and Dorothy Perkins noted a similar drop of 20%.

The high street market is more saturated than ever; the most successful clothing and fashion retailers in the UK have either a unique product offering or value for money proposition combined with strong consistency in brand messaging and excellent execution backed by a strong creative team.

UK fashion retail has already begun to emerge stronger from the shock of the last economic downturn. Industry experts point towards retailers in the UK as being some of the very best exponents in this new age of fashion.

It has been reported that high street is in abject decline across the UK with consumer shopping behaviour moving towards a preference for ‘click and flick’ rather than brick. Essentially, brick-and-mortar spaces will be reduced to their most utilitarian functions in order to adapt to changes in consumer behaviour. One key assumption of traditional retail marketing is that the consumer must inevitably visit the physical store to make a purchase. The introduction of “virtual competitors” introduces a wider set of complexities and opportunities for retailers including readily available price comparisons, fewer barriers for international competitors and lower prices due to lower fixed costs for “pure play retailers”.

It is largely suggested that the key challenge for high street relates to the extent to which consumer expectations have been raised by digital retailing, namely: 24/7 availability, instant price comparisons, endless supplies of known stock, personalised product suggestions and consumer-to-consumer conversations. Consumers are progressively worried about convenience and availability, and in recent decades, have increasingly chosen to shop out of town parks and malls thanks to a level of convenience and choice not available on high street. Ultimately, e-tailers have additional tools and resources in place to ensure a better shopping experience for the consumer.

The changing perception of retail is largely fuelled during the “Evaluation” and “Purchase” stages of the Consumer Decision Process. Shoppers now visit retail spaces with the expectation that they will be enjoying an experience, rather than solely buying a product.

In terms of the Consumer Decision Process, this contributes significant importance to “atmospherics,” confirming classic work by Pine & Gilmore (1998) suggesting that in order to distinguish retailers from online stores, businesses must “orchestrate memorable purchase environments for their customers.” Essentially, the degree to which a company is able to deliver a desirable experience that meets or exceeds customer expectations will largely determine the success of this business in the marketplace.

Changing demographics on a local level as well as an aging population are factors that have contributed to the demise of the UK’s traditional high street. KPMG conducted a study and found that “by 2030, the number of people aged 65 or older (known as the grey pound) is projected to reach 15.5 million, growing 43% from its level in 2012”.

The group suggests that over the next ten years, two-thirds of all retail spending growth will come from this older age group, and therefore predict that in order to attract more of the grey pound, retailers must rethink all aspects of marketing communications including store design. Nevertheless, Nick Bubb (KPMG) claims “the boom in the take up of smartphone and tablet device technology (and the related explosion in the power of social networking) is a bigger influence on the pattern of retail spending than demographic change.”

The digital economy is described as the preeminent driver of economic growth and social change. Similarly, a digital society is defined as “a modern, progressive society that is formed as a result of the adoption and integration of information and communication technologies at home, work and education. As such, it is widely accepted within literature that growth of the digital economy will lead to extensive transformations to the economy as a whole, with the Boston Consulting Group discussing “four waves of change sweeping over consumer goods and retail”, as an example.

Waves of technology adoption also had an implicit effect on high street retailers, with the first wave of Internet retailers, or “pure play retailers” (including Amazon and Netflix) developing a new channel to communicate with their customers, challenging the established marketing channels of retail stores, catalogue sales, and home shopping. The second wave of e-retailers was said to include those with traditional bricks and mortar stores, and highlighted the idea of channel conflict and sales cannibalization, with the Internet channel becoming a competitor for physical distribution channels.

A report by Econsultancy (2012) showed that 43% of UK shoppers use their smartphones while on the move to compare prices and read product reviews. This change in shopper habits is evidence that consumers always have access to the mobile internet, with an iModerate survey also finding that more than half of smartphone owners are using the internet in stores.

Consumers can access much more information than was possible ten years ago. Importantly, this information can be of a higher quality (through using RIA or mashups applications), more trustworthy (other users’ opinions from a virtual community), more easily processed (applications for price/product comparisons) and more easily edited than ever before.

Nevertheless, this is not necessarily a bad thing for retailers. In the past year, the use of iBeacon technology has been on the rise, with companies creating apps to bridge the communication gap and engage more with customers in stores. Dyson MD, David Hollander explains to Retail Week that retailers can benefit from taking full advantage of the role physical stores play in shoppers’ buying decisions. He elaborates, noting “82% of our customers perform research online but an even bigger number do so in the store. We need the in-store experience, so it is appropriate to reward retailers that provide a service to shoppers than we benefit from”.

Manufacturing a social in-store experience with purchases delivered directly to the consumer could be another way of combatting challenges facing the UK high street by building on current online offerings. A customised high street, be it through digital storefronts or connection with social media, is considered a viable option for improving information and communication flows. In practice, it is evident that businesses are progressively using collaborative methods (usually via social networking sites) to involve customers or networks within the production process.

Ultimately, the future of high street means more choice, lower prices, and better services; all factors likely to lead to the re-imagining of the brick-and-mortar environment. Consumers today have rapidly changing expectations thanks to a rapidly changing digital environment, a combination of factors that have left some retailers for dead.

It is evident that economic influencers and technological advances have collectively reshaped the retail landscape, and as a consequence, retailers are increasingly focusing on customer experience as a value driver. In our new omni-channel reality, virtual and physical channels are merging, thereby forcing retailers to rethink both their virtual and physical offerings and experiences, and adapt to this new era of customers and commerce.