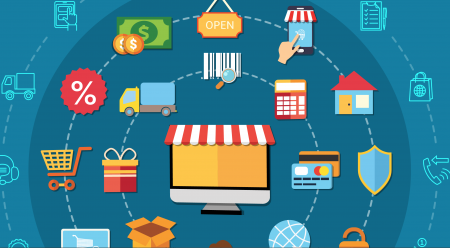 Ever since Salesforce acquired Demandware in 2016, the company has made profound upgrades to building and customizing storefronts within the platform. The consolidation of these changes became known as Storefront Reference Architecture (SFRA), and its new user interface framework, Bootstrap 4, allows users to customize the storefront and provide a consistent experience across all device platforms (mobile, tablet, and desktop).

Since its first release in 2011, Bootstrap 4 has become one of the world’s most popular user interface frameworks for building responsive, mobile-first sites. One of the features that make Bootstrap so popular is the mobile-first approach to architecture, which has become a design paradigm for web development beyond eCommerce.

Due to the widespread popularity of Bootstrap 4, it’s no wonder front-end developers were excited by the introduction of a defacto standard UI framework for eCommerce site development. Sometimes major changes can cause major disruptions but this change has benefits for everyone – front-end developers, our clients, and our client’s customers. Everyone wins.

One of the major benefits of the Bootstrap 4 framework is consistency across devices. This is due to the framework’s grid system. While you might think that this could hamper creativity, it actually provides significant benefits as it allows a site to scale more effectively from small form factors like a phone all the way up to the desktop. Because the framework sits between the eCommerce site and the underlying device specifics, it assists site development while providing for a much better all-around user experience.

While Chrome remains the most popular browser in many statistics there are still 5 or 6 other browsers in common use such as Internet Explorer to Mozilla Firefox. For years, this has required developers to account for subtle differences in the rendering engines used in each browser (a rendering engine is software behind the web browser that displays pages). In the past, it was inevitable that a storefront would act or render differently depending on the browser.

While this can still sometimes happen, the consistency provided by Bootstrap 4 introduced a level of control that front-end-developers didn’t always have. The Bootstrap development team has focused on supporting the latest release of all major browsers: Chrome, FireFox, Edge, Explorer, iOS, Safari, Android and Opera. Supporting framework functionality in a wide range of browsers has been very helpful in site development as it allows the site development team to focus on functionality and less on the specifics for different browser version on different platforms.

Another Bootstrap advantage is that it is open source. “Open source” refers to source code that the public can access, and modify, at will, while still being coordinated to remain consistent with the existing releases of the framework. These open source environments usually breed ingenuity and creativity because they attract developers who know how to extend the platform capabilities for new applications. In the case of Bootstrap, numerous plugins are available for the framework: for example fully customizable calendar widgets.

Bootstrap 4 also makes use of Flexible Box Layout or Flexbox, a CSS3 web layout model. Though it’s been around for a while, Flexbox is becoming more compatible with modern browsers. The general consensus is that the Bootstrap is essentially ushering in the future of front-end web development by establishing Flexbox as the standard. The model includes tons of modern, useful features which simplify experience design. Auto margins, responsive sizing and vertical centering are just a few features that are included within the tool.

In combination with Bootstrap, SFRA formalizes a lot of processes that otherwise where left for interpretation. Salesforce has been able to usher in a new era in eCommerce implementation and design; one in which both developers and consumers are seeing profound benefits.