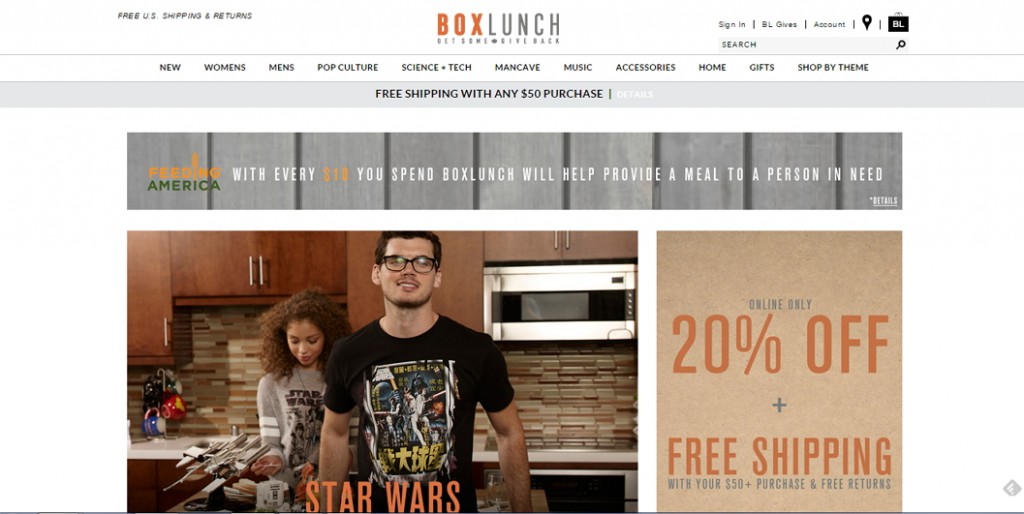 Today on the eCommerce holiday calendar is Giving Tuesday (#GivingTuesday). Created in 2012 by the 92nd Street Y in New York City, the day kicks off the busy fundraising season for charities. Nearly 31% of all annual giving takes place at the end of the year.

But why just one day a year devoted to doing good online? What if the ease, speed, and pervasiveness of eCommerce could be employed to raise charitable contributions on a daily basis?

Yes, we know about TOMS, Warby Parker, Smile Squared and other companies. But, we don’t mean in-kind donations. We’re talking about raising money – money that enables charities to worry less about year-end financial contributions. Money that smooths out cash flow and makes it easier for charities to plan and fund programs throughout the year.

One example of an eCommerce site that gives back is BoxLunch, a specialty retailer with a social conscious. The company partners with national and local charities to support their causes. When a shopper spends a certain amount of money on the site, BoxLunch makes a donation to the charity.

We see this model as the next phase of socially conscious eCommerce. Three industry trends point in this direction.

Consumers expect companies to act responsibly when it comes to social and environmental performance. And companies are listening. They understand their financial success depends on their social responsibility, environmental stewardship, and corporate ethics.

The results of several surveys back up this position. Their studies of how a consumer’s attitudes toward corporate social responsibility affect buying behavior reveal that:

eCommerce companies can change the world by linking buying and giving back. There’s no real limit to what a company sells or the cause it supports. They only need to make sure to support causes their consumers care about.

Making it easy for a consumer to shop and donate money at the same time is multi-tasking at its best. Take a look at these examples of socially conscious eCommerce companies.

Cole and Parker – This Canadian sock company partners with micro-loan organization Kiva. 20% of the proceeds from Cole and Parker’s sales of luxury socks goes into a fund to provide small loans to entrepreneurs in developing countries.

Patagonia – A designer of outdoor clothing for the “silent sports” (i.e. climbing, surfing, skiing, and trail running), Patagonia has various charitable ventures included in their corporate mission. One in particular is 1% for the Planet. Since 1985, Patagonia has pledged 1% of sales to the preservation and restoration of the natural environment.

LUSH – The hand-made cosmetics and soap company uses its shops and different platforms to raise public awareness. In 2014, they created a limited-edition soap for a campaign to protest the killing of sharks for their fins. LUSH raised $210,000 for the cause.

Give Bones – It’s not only people who benefit when companies give back. Givebones donates 10% of its sales to shelters and rescue groups. Their goal is to reduce the amount of homeless dogs being euthanized every year by raising awareness and funds.

Nau – This designer of sustainable outdoor clothing donates 2% of each sale to several organizations. Nau lives its ideals by supporting groups like People for Bikes, the Conservation Alliance, and an environmental think-tank.

Harnessing eCommerce to raise funds for charities and causes around the globe makes it easy for consumers to donate directly to a cause in which they believe. The rising spending power of   Millennials who’re passionate about making a difference will result in an increase in retail-based philanthropy. For these digital natives, socially conscious eCommerce gives them the power to do good without missing a beat in their busy lives.